Gairo's territory extends from the Gennargentu's foothills, the highest mountain range of Sardinia with its peak of 1834 m, and up to the coast, washed by the Tyrrhenian Sea.
This particular geographic and morphologic configuration determines the presence of various microclimates, that render the unitary climatic classification extremely diversified. In general, the climate can be characterized as Mediterranean with hot and dry summers and with cold and “usually” damp winters.
“Usually” means that since some time the decrease of the average winter precipitations has become a serious problem for the whole Sardinia.
The average annual precipitations vary between 750 and 1000 mm, as Gairo Taquisara's meteorology station shows, so as a whole, it's not little. 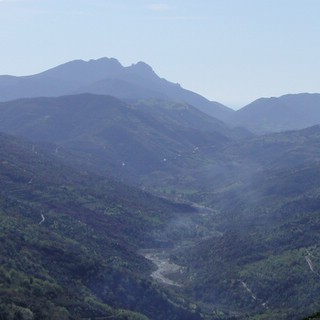 Valle del Pardu (Foto Virgilio Piras)
In fact, 75% of them and more tend to concentrate in autumn and winter periods, while only 25% and even less rest for the other two seasons. Thus, the territory's water flows are also affected by this considerable fluctuation in precipitation, so that they are classified as “water flows of torrential regime” rich in water in autumn-winter period, and rather drought in summer.
The temperatures reach their maximum points (sometimes higher than 37° C) in July and August, but it's often very hot in June and September, even if not so much as in other summer months. Those minimum are of about 0° C or below zero between December and February, and they are sometimes accompanied by heavy snowfall.
The white blanket doesn't usually last long, except the highest and the coldest peaks, where snow may remain till February - the middle of March, unless there are some extraordinary events, that cause damages to the local people.
The dominating winds are: the Westerly and the Mistral that blows from the north-west and is of particular frequency and intensity (with points of 90-100 km/h).
The particular climatic situation conditioned in the past, as well as today, the transhumance of flocks, that during the summer period stay in the mountains, while in winter they go down towards the coast.