THE CHURCH OF HOLY SPIRIT
The church of the Holy Spirit, situated in Gairo Vecchio, for a long time has remained just ruins. It may have been built by women from Ulàssai as result of a vow to the God.
A new village was founded around another church still devoted to the Holy Patron Spirit, which you can reach from the central part of the village, going upstairs the “stairs of Church Square”, made of Sard granite.
Inside you can see a big central nave which two small aisles adjoin. A large and a high presbytery makes a particular effect on a visitor, because of the big mosaic of Franco d'Urso, representing the descent of the Holy Spirit to Virgin Mary and the Apostles. 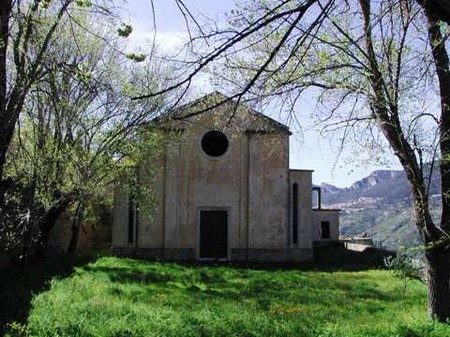 THE CHURCH OF SAN LUSSORIO
The church of San Lussorio is situated in the countryside, several kilometers distant from the new Town of Gairo following the road to Cardeddu. Here the celebrations dedicated to the homonymous saint (see the “Town Festivities” section) take place.

THE CHURCH OF BUON CAMMINO (GOOD WAY CHURCH)
The building of the present rural Nostra Signora di Buon Cammino Church (Our Lady of Good Way Chirch) dates to the period when the coastal populations moved from the coast because of the incursions from the sea. Once it was probably located in the valley of Foddini, along the Eastern Road, dating back to the Phoenician-Punic-Roman period. Its present position hides it completely from the sea side, despite it's situated at about a kilometer's distance from the coast.
In the second half of the 18th century Prof. Michele Plazza found the “boundary post”, an enormous stone in the church walls with the ancient inscriptions on it, indicating the borders of the antique populations' territories, and, probably, that border, that today divides the territories of Bari Sardo and Gairo. It's supposed, that when the church was built in its present location, the stone was replaced from the valley of Foddini as building material and put on the ground, considering its considerable weight. Thereby hangs a tale about this boundary post, and to tell it we would like to quote an extract from Don Flavio Cocco's text “The dates relative to the history of the towns of the Ogliastrian Diocese, Vol.1”:

“[...] The stone originally was situated in some other place, but not far away; probably it was situated in the valley of Foddini to indicate, who knows, that border that today separates the territory of Bari Sardo from that of Gairo, or some other unknown to us. During the building of the church in its present location the stone may have been transported from the valley of Foddini together with other materials. The fact that it was close to the ground, as the expression used by the professor makes us assume, means, that the stone was placed at the easiest height to overcome, considering its significant weight. It may be still there, where the Plazza saw it, because it was a good base for reconstruction of the church in 1801.
There's no difficulty, to my mind, to attribute that stone, that the Professor Plazza says to have found in a rural church of Bari, to N. S. di Buon Cammino Church, which is situated on the territory of Gairo. On the contrary, it's more difficult, I should say, even impossible to admit what the Professor says, because an official document of the time affirms, that there were no rural churches on the territory of Bari Sardo at the time, when the Professor found the stone.
It's referred to the statistical table, which the Bishop of then presented at the Holy See, comparative to Diocesi, that nowadays is deposited in the original in the Vatican Secret Archives. A microfilmed copy of it remains deposited at The Faculty of Education of Cagliari University.
At that time, as well as nowadays, there were no rural churches on the whole territory of Bari Sardo and of the Marine of Gairo, except that of Nostra Signora di Buon Cammino Church.
There is a church, that can be seen, about 5 km distant from Bari Sardo, and at a half-kilometer's distance from the border.
It is 30 km distant from Gairo, and it can't be seen from there, until you make an hour's drive {today it takes about half an hour}.
Whoever passed there at that time couldn't find the border between two territories, as it is difficult to see even today, unless you consult topographical maps or ask somebody for the information.
Anyway, at the Professor's researches times topographical maps didn't exist yet, and the oral information was not reliable.
Gairo's guides actually were faraway, and those of Bari Sardo couldn't say more that the Church belonged to their town. In effect, they argued about the present territory of the Church's location against the Gairo's Commune for more than a century