After the period, when many traditions seemed to be disappearing, the return to the so called “rural festivities” has been occurring since some years, which attract more and more participants.

Such feasts, in most cases, take place in the sanctuary sites outside the town, they are: San Lussorio in the homonymous church, la Madonna del Buon Cammino (the Lady of Good Way) in the locality of Buon Cammino, la Madonna degli Angeli (the Lady of the Angels) in Gairo Taquisara, lo Spirito Santo (the Holy Spirit) in the town, St.Elena in the homonymous church in Gairo Vecchio and San Giuseppe in Gairo Taquisara.

These celebrations, taking place in Gairo, have generally a religious origin, except the Sagra (Festival) of wild boar, which has been introduced recently and which is celebrated together with the Feast of Sant'Antonio Abate.

Sagra del cinghiale (foto Francesco Carta)
The last one dates back to a distant past and is very followed by the population, especially, because it was related to a peasant tradition to believe, that to make a big fire in the evening of that day was a good presage for a rich harvest. Nowadays, the opportunity to cook the meat of wild boar is seized, which the hunters of the place provide during the hunting season. On this day different sweet things are also served, made specifically for the occasion by the people, who participate in the organization of the Sagra. 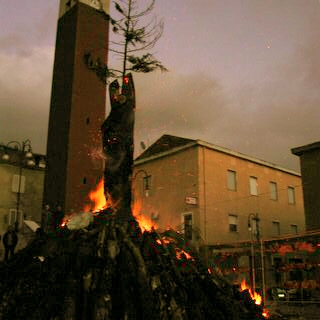 Sagra del cinghiale (foto Virgilio Piras)
All this is, certainly, accompanied with an excellent wine or other drinks. Usually, all the festivities in the town are also accompanied with dance and/or other performances, sometimes games or sport competitions. Actually, the monotonous everyday life of the town today, as well as when people still lived in the old town, is broken with the popular festivities, during which apart from praying, people enjoy themselves, sometimes in childish and almost silly ways.

For the Holy Week (the week before Easter) young people had much to do for the “noise of Ufficio delle Tenebre” (Mattutinum Tenebrarum - a catholic liturgy) . It seemed strange, considering the unusualness of this custom, that sometimes noise in the church can be created, but it has become a rite. Someone brought a “matracca”or “furriola” (species of a flask), someone a cane tube fastened to a topped off ax horn for producing loud rumble: Peppino Meloni managed to produce much noise that exceeded a general clamour, thanks to a big triton shell, found on the beach.

Everyone held their breath waiting for the priest to give a tap on the Breviary after the Mass, that was a signal to start a devilish clamour, taking place in the doors of the church. On Good Friday the clamour accompanied the whole procession of Addolorata (of Madonna), whose statue was brought to the Holy Spirit Church, and the next morning, the Easter day, it was taken away again to finally celebrate the meeting with the statue of Risen Christ punctually in the place of Abbargius.

In the end of the procession the young enjoyed themselves to make the clamour with the numerous at the time “furriolas” and “matraccas” - the instruments, that were ancient “toys”, specially created for making noise.
There was (and is still today) another occasion to break the monotony - it's the midnight Christmas Mass. Children and teenagers go from house to house to ask for some characteristic food, cooked for the occasion. On the first day of a new year they shout “a is istrinas” - “to gifts”, that is nothing but the gifts for happiness they receive from all the families they visit. For the Feast of Sant'Antonio Abate the young shout “a is panisceddas”, that means the sweets made of raisins, almonds, walnuts and boiled wine. For the Carnival it is usual to hear the shouts “a is zippulas” - “to frittellas” - sweets that in Italy are made during the period of Carnival.

On All Souls' Day it's shouted “a is animas” - “to the souls of all the faithful departed”.
In all these occasions all the families, who could afford it, gave something to those, who came to ask for something. In fact, on those days women filled a basket with various sweets, nuts and, sometimes, even pennies to give to everyone, who came to knock their doors according to that ancient rite. Today this rite is still practiced, but mostly on All Souls' Day.

A night before the New Year, it was used to play a game, guessing marriages. Names of a young man and a woman of the town were written on two green olive tree leaves. Then the two leaves were thrown on the hot ashes of a fire place at a certain distance between them. Because of the warmth the leaves dried and jumped hither and thither, so if they moved toward each other, then the couple would marry, otherwise the prophecy was contrary.
Among the particular festivities of Gairo we should mention the feast of the Holy Spirit, that of Virgin Assunta, the feast of Sant'Elena, that take place in the town, as well as the feast of the Lady of Good Way and that of S.Lussorio, that take place in the churches with the homonymous names.

A church, that has been destroyed yet, was dedicated to the Feast of the Holy Spirit, and there is a legend pertinent to its construction.
Despite the Patron Saint of the town was Sant'Elena, to which the church in the old town of Gairo, where it's celebrated, was and is still dedicated, and despite she is not anymore the patron saint of the new town, the celebration of the Feast of the Holy Spirit started with a spectacular Novena, in which the citizens of the nearby Osini, Ulassai, Lanusei, Jerzu and other towns took part. Novena is a religious practice consisting of a cycle of prayers and devout exercises, lasting nine days (from the mediaeval Latin “novenus” - “nine”), that are carried out in the honour of and as a sign of devotion to the Saint, in order to obtain blessings.

On Saturday, on the eve of the feast, when it was getting dark a “su ingiriu” took place: the women who had some personal problems or whose parents had any turned on knees around the statue of the Saint Trinity and then around the church, praying with strong devotion. Sometimes this penitential praying went on with a particular characteristic: some women, who must have had very particular personal circumstances, turning around the statue on knees passed there even with a tongue.

Long lines of women, walking two by two and reciting the Rosary, came on foot from the neighbouring towns every Thursday, starting from the week of Easter, stayed at the Mass, and then returned back home in small groups. The feast was celebrated then on Sunday, people participated in the Mass and in the procession.
The following Monday there was the day of bachelors, “Sa Festa de is Bagadius”. The people from Lanusei and Ilbono came. The girls from Lanusei honoured the Holy Spirit with the title “Su Santu Coiadori”, “the haint best man of marriages”: in fact on that day the girls gathered in the locality of Mont'Orrubiu, distant one km from Gairo, and threw a shoe with a stone inside, and then made their marriage prophecies according the way it rolled.

This feast is still today visited by people originating from Ogliastra and Barbagia di Seulo. In the past the pilgrims who came for the feast were given a piece of roasted meat, “su carramponi”, from which the Sard name of the feast comes - “Sa Festa ‘e Su Carramponi”.