The Valley of Baccu Nieddu, that of Sarcerei, the zones of Taccu and of Genna are, in the mountains, among the richest in woods, while both forests of bushes and trees are present, and they extend up to the coast of Coccorrocci. The different types of vegetation, that take part in forming landscapes of various environments on the territory, can be characterized in the following way:
Degradation low shrubs, formed by Cistus Albidus, Salvia Cistus, lavender, from which a homonymous essence is extracted and used for perfumes production.
Mediterranean Sclerophyll shrubs: are formed by the vegetation with hard leaves, such as lentisk, terebinth, tree heath, red juniper, dwarf juniper, Phillyrea, Butcher's broom (Ruscus Aculeatus), ivy, clematis, broom. 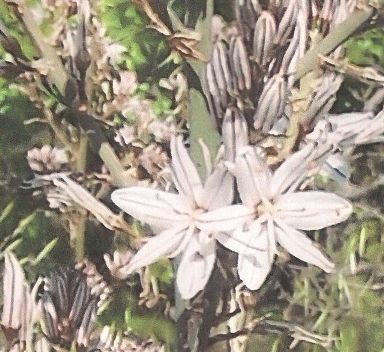 Asfodelo (Foto ristorante l'asfodelo)
Holm wood: is very thick and almost pure, extends from the sea to the mountains, with the sporadic penetrations up to the altitude of 1200 m; thus, it covers a great part of Gairo's territory not adapted to the agricultural and cattle breeding use.
Venerable coppice holm wood: in this type of vegetation venerable long-boled holms were cut down to form coppices, in turn, partially reduced to bushes. They are rather homogeneous, with few elements of underbrush. The coppices in past times were generally used for coal production, and nowadays - (not always rationally) for firewood production with the results of the evident degradation phenomena.
Long-boled coniferous wood: it is a result of the reforestation activity, carried out by the Nuoro Forest Inspectorate over the total surface of more than 1000 HA. These “reconstructed” forests were planted for hydro-geological protection. The vegetation species for resettlement are mostly pines: Stone (or Umbrella) pine, Maritime pine, Black pine, Black laricio pine, Aleppo pine, Insigne pine.
Long-boled mixed and young wood: it is also a result of the Nuoro Forest Inspectorate's reforestation activity, performed over the total surface of more than 600 HA. It includes Lebanon Cedars, chestnut trees, cherry-trees, red junipers, dwarf junipers, holm oaks and walnuts.
Mountain Garrigue: it's a kind of a Mediterranean undergrowth typical for more degraded zones, with frequent rock outcrops. It's a formation, where only few elements of shrubs remain, and some new species appear, more resistant to soil aridity and strong insolation. It's composed of low and discontinuous evergreen bushes. The prevailing species are: rosemary, thyme, lavender, terebinth, rock rose, broom etc. 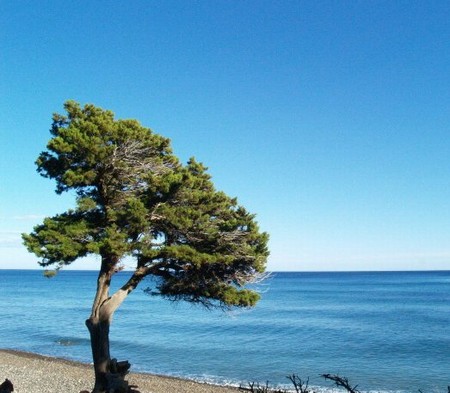 Ginepro su spiaggia (Foto Virgilio Piras)
Riparian vegetation: this is a vegetation type that rather grows along the rivers of water flows, consisting mostly of alders and willows.
Other plants are also present here, such as: holm oaks, oaks, chestnut trees, cork oaks, cherry-trees, olives, walnut and hazel-nut trees, yew-trees, acacias and other long-boled trees, that characterize various zones of Gairo's territory. The valley of Baccu Nieddu, that of Sarcerei and of Serra Cortiaccas, the zones of Taccu, of Genna, de Is Tostoinis and de Su Candelessargiu are among the richest in woods in the mountains, while in the coastal zone, near Punta Cartucceddu, there is a very old holm oak wood, which in some places reaches the sea, especially in the locality of Coccorrocci and Sferracavallo Point, below Scala Ogliastra.
The undergrowth includes hawthorn, holly, rock rose, lentisk, juniper, heather, broom, arbutus (strawberry tree) with its red full of cones fruit, which ripen in the end of autumn. They can be very well eaten, or used to produce excellent acquavite, and from strawberry trees' flowers the bees make bitter honey (that is extracted from hives, sometimes wild ones, in autumn), very costly, but very precious as panacea for the respiratory tract. You can find here myrtle as well, which leaves are used for flavouring meat of various animals, and from its black berries, drawn in acquavite, the famous liquor mirto is extracted. Besides, thyme and rosemary grow here, that are also used for flavouring meat and fish, blackberries that ripen in summer, and different other fruit plants (lemon, orange, peach, fig trees, etc.).
The problem of the conflagrations, that torture during the summer periods the whole Sardinia including Gairo's territory, is very relevant. As a result, they cause the soil erosion in superficial layers: it is, actually, a great satisfaction for herdsmen, when a certain territory is burned, because the following spring young grass grows there, that is obviously an excellent fodder for their cattle.
But the frequently repeated on the same territories conflagrations, made by incendiaries with no shame, result in the impossibility of the soil to adequately renew. It irrevocably damages the territory, which will become subject to the erosion by weathering, in particularly, by the precipitations, that, as it has been mentioned above, are concentrated in brief periods of the year. This fact, considering the already existing hydro-geological imbalance, causes the escalation of damage, which may have as consequences, even in the short-term period, landslides, mudslides and even desertification.
Some part of the pastures of Gairo's territory, as those of the towns of high-Ogliastra, can be characterized as having medium slope and large presence of weeds, both bushes (rock rose, lentisk, broom of various types) and grasses (ferule, asphodel, from the flowers of which bees make very precious honey, and thistles of different types, some of which are edible). Such presences are a typical manifestation of the primary wood degradation, caused by the conflagrations, followed by the soil erosion as the result of the torrential character of precipitations and inappropriate pasturing. In some critical cases the improvement interventions may be very difficult, that increases the time and the costs of the procedure.
The function of hydro-geological protection of the soil is one of many others, that are performed by the vegetation. In effect, the so called secondary products should be noted, like firewood, pasture, fruits from the forests (acorns, chestnuts, cherries, pine seeds, etc.), mushrooms, very tasty wild asparagus. Besides, it works as “a green lung”, it's also a pick-nick and relax place both for the native people and those nonindigenous. The presence of flowers on Gairo's territory is numerous, from roses to cyclamens and orchids.